On the whole most migrainers are open to trying alternative treatments if there is good evidence out there showing its success. If it’s an effective method for managing or preventing migraines then it doesn’t matter too much whether it’s all-natural or a pharmaceutical treatment; if it works it works. Well while things such as eating almonds  and getting enough sleep are fairly well known practices undertaken in the pursuit of avoiding migraine pain, one technique that doesn’t tend to receive so much publicity is yoga. 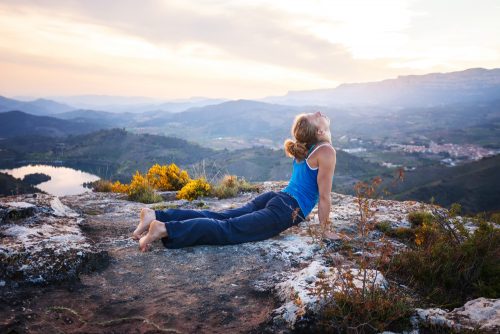 Yoga has been around for over 5000 years and was first practiced in Northern India by the Indus-Sarasvati civilisation. However, some researchers think that it may be up to 10,000 years old, but the first instances of it are hard to trace as the early writings were written onto fragile palm leaves that were easily lost and damaged.

Yoga is thought by some to be just a series of stretches done one after the other, but it is more than just putting your body into interesting positions to improve your flexibility and strength. Modern yoga focuses on proper relaxation, proper exercise, proper breathing, proper diet, and positive thinking and meditation; and studies have shown that this kind may also help people who suffer from migraines to have fewer and less painful attacks. This, and other types, have been shown to have other health benefits too, such as managing depression, insomnia, asthma and diabetes, and also reducing heart rate and blood pressure.

The way that yoga is thought to help migraine sufferers is by reducing the activities in the brain that lead to migraines – it helps by calming the body’s nervous system. As well as this, it has been shown to have a positive effect on certain chemicals in the brain. For example, more serotonin is released as a result of yoga, which is good news as this is a chemical that helps to transmit signals between different areas of the brain. Serotonin also helps to relax tightening blood vessels in the brain, something which can be a cause of migraine in some sufferers.

To prove the efficacy of yoga, in India in 2007 a small study of 72 migraine sufferers was conducted. The participants were randomly divided into two groups: a yoga group who took part in an hour-long session five days a week for three months, or to a migraine education group. The researchers found that the yoga participants had fewer headaches during migraine attacks, and those that they did have were less intense.

Unfortunately there aren’t many studies dedicated to the investigation of migraine and yoga, so while it has been shown to be helpful, we do not know if there are any specific aspects of yoga or yoga positions that are particularly effective. To end on a positive note however, the majority of people can practice yoga to some extent. Plus, as it is an alternative therapy and so could be useful if other treatments have not been as effective, it can be easily incorporated into a wider migraine management programme alongside medications.