Migraine and Reflexology – From Ancient Egypt to Present Day

Reflexology is a system of massage which is used to relieve tension and treat illnesses around the body through the gentle stimulation of reflex points on the feet, hands and head. It utilises the 7,000 nerve endings which are in the foot and uses pressure on these to relieve symptoms elsewhere in the body. When there is no specific condition to treat, it is also used as a method of promoting good health and the prevention of illness through the reduction of stress and tension. 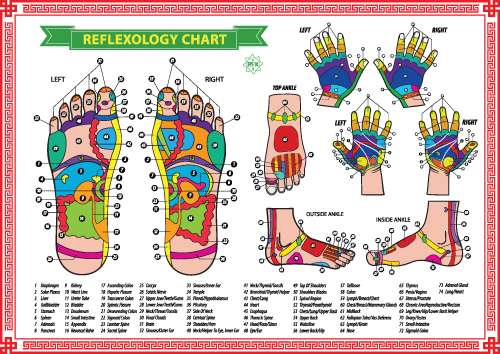 But how did it all start?

Reflexology is a practice which has been used for thousands of years as a cure for a whole variety of ailments. There’s evidence that people in ancient China and ancient Egyptians used techniques which were similar to Reflexology to cure medical problems. Inscriptions were found in a physician’s tomb in Saqqara in Egypt which appear to show the art being practised. The hieroglyphics next to the images translate as “Don’t hurt me” followed by the reply of “I shall act so you praise me”. Appropriate given that reflexology is one of the rare treatments which can be said to be pain free!

The next stage in the history of reflexology comes about in the early 20th century thanks to an American physician named William Fitzgerald. His creation wasn’t quite what we know as reflexology today but was very close and was called Zone Theory. Originally an Ear, Nose and Throat specialist working at the Boston City Hospital and at St Francis Hospital in Connecticut, Dr. Fitzgerald was encouraged to pursue his theory and to publish articles on it by his friend and colleague Dr. Edwin Bowers. The pair published a book together in 1917 which was called “Relieving Pain At Home”. In the foreword to the book is written “Humanity is the awakening to the fact that sickness, in a large percentage of cases, is an error – of body and mind.”

Dr. Fitzgerald’s Zone Theory split the body up into ten zones and labelled on the foot what he thought was the matching part which, if gentle pressure was applied, would bring relief. He also identified points on the tongue and palate that would do a similar job and discovered that the pressure on the right points could take away pain, but also in some cases remove the underlying cause of the problem as well.

A couple of decades later reflexology was developed further by a nurse and physiotherapist named Eunice Ingham. She built on Dr. Fitzgerald’s maps to include specific pressure points. She published her book “The Stories the Feet Can Tell” in 1938 and it was translated into seven different languages – thus spreading the word of the practise around the world. It was at this time that Zone Theory was developed to become reflexology (although Zone Therapy also exists today as a different practice which does not take in the anatomical model but relies purely on general zones).

Today the level of regulation surrounding reflexology varies from country to country. In Russia only licensed physicians can legally practise reflexology, whereas in other countries it is a common home-style remedy, but around the world there are at least sixty -six different professional organisations dedicated to reflexology. In the U.S. in 1998 there were nineteen states with laws that required the licensing of massage/reflexology therapists. In some states but not all, there are different regulations for massage therapists and reflexologists.

Official certification comes via training. At present reflexology is taught via seminar series, classes, and training films. Following a successful six-month programme, including two hundred hours of training and administering reflexology to a minimum of fifteen people, a practitioner can gain official certification. Even so, qualified reflexologists make it clear that reflexology is not a substitute for medical treatment and that the main aim of reflexology has to be to promote wellness. The advice of doctors should still be sought.

Reflexology is a method of treatment which has had a great deal of controversy surrounding it in more recent years, as the preference for modern drugs and technology-assisted surgical operations has increased and the efficacy of traditional alternative treatments questioned. In an effort to address the question of efficacy there have been many trials and tests done which have focused on a variety of different conditions and whether reflexology can help to relieve them.

One of the most relevant studies in regards to migraine and reflexology was conducted in 2000 when Gail W. Testa Ph.D., an American Holistic Therapist, ran a blind, random trial in which thirty-two patients with headaches were assessed after a session of foot reflexology, and again at a three-month follow-up. Results showed that reflexology was at least as effective as drug therapy.

Having said that, an analysis of 217 publications exploring the efficacy of reflexology was conducted in 2009. Of the eighteen randomised, controlled trials which met the inclusion criteria, twelve failed to show convincingly that reflexology was an effective treatment, five suggested positive effects, and one had a result which was unclear. The reflexology debate will doubtless continue for many years to come.