Could A Magnesium Deficiency Be Making Your Migraines Worse? 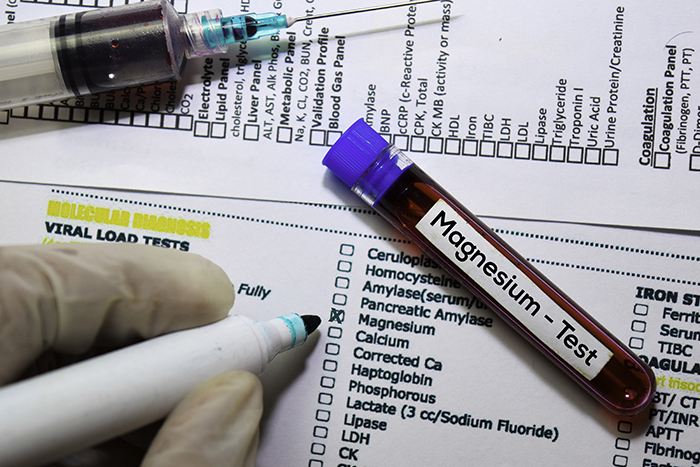 A magnesium deficiency is another thing which can make it more likely that a person will suffer from migraines.

A systematic review (the findings of which were published in the scientific journal Nutrients) found that there is a correlation between magnesium deficiency and headaches; and that this is an independent risk factor for migraines. Not ingesting enough magnesium, in addition to increased loss of it throughout the digestion process, can contribute to the deficiency.

It is possible to include more magnesium in your diet by eating foods that contain high levels of magnesium such as nuts, dark leafy greens, seeds, whole grains, beans and fish. It is also an option for those who have a migraine deficiency to take tablet supplements, or magnesium salts (though a doctor should be consulted before starting to take supplements).

Magnesium is an important mineral for the body to have. It is involved in enzyme and nerve activity, DNA and protein synthesis, and many key bodily functions. In terms of migraines specifically, magnesium has been shown to inhibit pro-inflammatory intracellular signalling. For some migraine sufferers, inflammation of blood vessels in the brain is a key element of their migraines – so a lack of magnesium (which helps to keep inflammation down) is especially bad news.

It’s also worth noting that a lack of magnesium was found in some migraineurs who suffered with aura migraines as a result of cortical spreading depression. Investigators explained that magnesium decreases the level of circulating calcitonin gene-related peptide, which is “involved in migraine pathogenesis through its ability to dilate intracranial blood vessels and produce nociceptive stimuli.”

It has been reported that magnesium, with its relative lack of side effects, is particularly compelling for the treatment of migraines and headaches within groups in which side effects are less well tolerated (such as children, pregnant women, and the elderly population). The review authors therefore concluded that, “the use of oral magnesium salt represents a well-tolerated and inexpensive addition for the treatment of headache patients, to reduce the frequency of attacks and the costs of treatment both in terms of economic burden and adverse events”.