Insomnia and migraine – Can addressing insomnia positively affect your migraine?

Many of us know that poor sleep can have an effect on the frequency of our migraines. Until recently this relationship between insomnia and migraine was not well studied.

Researchers at the University of North Carolina (UNC), Chapel Hill, studied this association by interviewing 147 adults with transformed migraine (TM).  None of the patients reported feeling “refreshed” upon awaking and four out of five regularly felt “tired” upon waking. 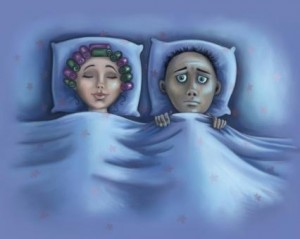 This compares to responses of individuals with infrequent migraines – approximately one in four felt “refreshed” upon waking and only one in three awakened feeling “tired.”

The UNC researchers in insomnia and migraine attempted to see if making changes in sleep patterns could have an effect on migraine frequency and intensity.  Forty-three women with chronic migraine were randomly placed into one of two groups.

The first group received formal instructions on how to improve their sleep habits. The other received placebo instructions.  They were asked to keep a diary of their headaches.

Six weeks later at the follow-up women who changed their sleep behaviour saw a significant improvement in headache frequency and intensity. Dramatic improvement was seen in one of three, to the extent that they no longer met criteria for chronic migraine.  None of the placebo group had such a dramatic change.

However, this placebo group was then given the formal teaching that the other group received and followed for another six weeks. At the final visit, six weeks later, almost 50% of all subjects who followed the sleep suggestion experienced headache improvement so that they no longer met criteria for chronic migraine.

The sleep plans given to the patients to improve their sleep quality are listed below;-