It only takes one really dedicated person to inspire generations for years to come. Sometimes this is good; like Ghandi and his salt march, sometimes not so good; like Nero and the persecution of Christians. Galen happily was one of the good guys and the cause which he chose to champion was the advancement of medical knowledge. Thanks to Galen huge leaps forward were made in the study of anatomy and diagnosis via symptom observation, and his work was still forming the basis of Islamic and European medicine up until the 17th Century… including his work on migraines. 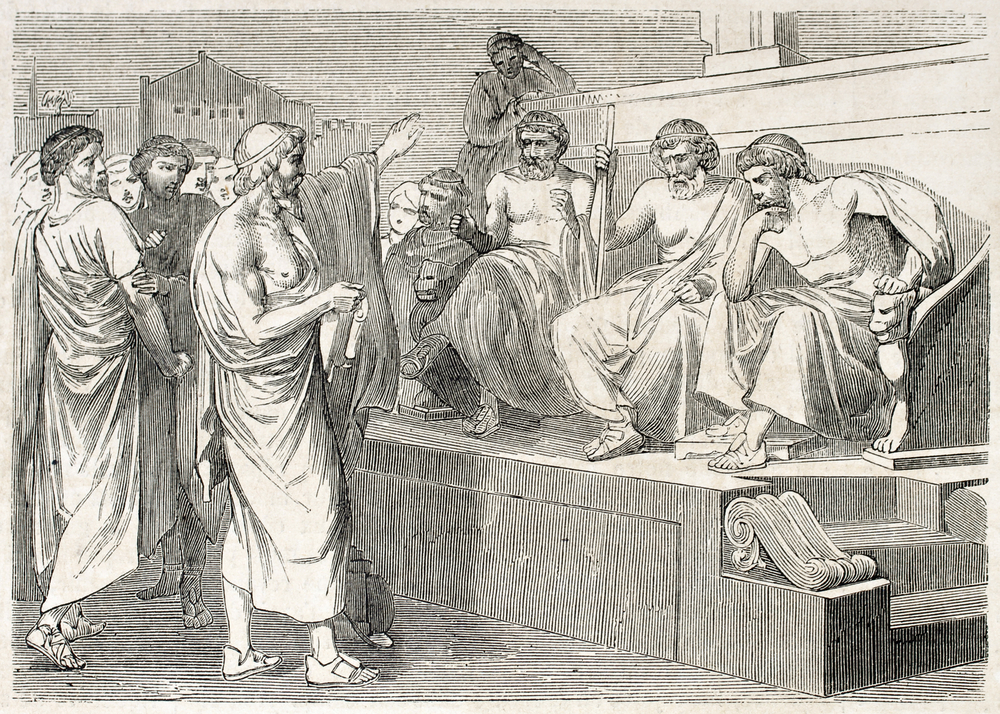 Born in 130 A.D. in the great ancient Greek city of Pergamum, Galen was first steered towards a career in medicine thanks to his father and a dream that he had in which the god of medicine, Asclepius (pronounced ah-sleep-e-us, in case you were wondering) told him to train Galen as a doctor. Thank goodness for dreams.

Galen studied hard and widely, looking not just at medicine but also mathematics, logic and philosophy. His education began at the medical school of Pergamum and then he traveled through Smyrna and Corinth, eventually arriving in Alexandria, which at that time was the centre of learning and research. Here Galen was able to study skeletons and read many works within Alexandria’s famous great library. Next he got even closer to human anatomy and its inner workings when he returned to Pergamum and worked for four years as a physician to the gladiator school. This proximity to open wounds and ripped muscles gave Galen invaluable insights into the way the body works. In total he spent fifteen years studying and training before he traveled to Rome and established his own practice at the age of 32.

He had studied previous scholars of medicine in his training as well as exploring his own theories. In particular he was a big fan of Hippocrates and drew great inspiration from the work which Hippocrates had started hundreds of years before him. Hippocrates and other Greek doctors had rather gone out of fashion with the Romans but Galen worked hard to re-establish their legacy and, among many other medical advances, expanded upon Hippocrates work into migraines. For one thing he strongly supported Hippocrates belief that vomiting was a good cure for migraines.

Galen was an advocate of the four humours of the body (blood, phlegm, yellow bile and black bile) being the main cause of bodily ailments and used them to explain many different conditions including migraines.

“How constantly do we see the head attacked with pain when yellow bile is contained in the stomach: as also the pain forthwith ceasing when the bile is vomited.” – Galen

Another thing he suggested might be a cause of migraines was inflamed blood vessels in the brain. Unfortunately for history this observation wasn’t expanded upon and is not recorded again for another 1,500 years. Building on this, Galen may well have stumbled across the visual aura stage of migraine, although he called it ‘scotoma’, or ‘shadow-eve’, which he stated was far more dangerous than the migraine in itself and is linked to modern day vertigo.

He also described an attack of ‘cephalea’, which could very well be an account of a migraine attack without aura.

“A Cephalea is a lasting pain of the whole head, which is with difficulty remov’d and which, by the slightest accidents, is so increased, that the patient can neither endure any noise, any loud voice, the splendor of the light, or any motion, but seeks retirement from noise and a dark chamber, on account of the intense pain: for some imagine, that they are beaten with a mallet, others that their heads left contus’d and distended, and in some few the pain reaches to the roots of the eyes, so that, in this species of pain, we have no reason to doubt but the whole membrane of the head is severely affected.” – Galen

However, generally Galen referred to these intense attacks of head pain as “hemicrania”, meaning half of head, as usually they were only found on one side. Later ‘hemicrania’ became ‘hemicranium’, then ‘hemigranea’, and after that morphed thanks to mistranslations from ‘migranea’ to the French word ‘migraine’ which we use today.

Some of the treatments Galen came up with for migraines are a little suspect though. His cures included devices that could be either inserted into the nostrils or eaten and that could remove phlegm, plasters and poultices, the application of sneeze-inducing sternutatories, and the wearing of amulets.

Although not many, if any, of these treatments are still used it has to be said that he was certainly a talented physician. He successfully treated five Roman emperors, some of whom also suffered from migraines, took on cases that no one else could solve; supported the legions of Marcus Aurelius on their campaigns; and was the personal physician for Marcus’s son and heir, Commodus; and it’s thanks in part to Galen that we call migraines migraines.

As far as leaving a lasting impression on the ever-changing medical world goes, that’s not bad.