We love paracetamol. It’s such a common drug that it’s hard to imagine life without it. It comes in all different strengths, and in the forms of tablets, capsules, liquids; the list goes on. We use it for all  kinds of pain management, from stomach aches to headaches to sore throats. It can be a drug on its own, or as a component of another medicine or even as an ingredient in osteoarthritis medications.

In fact, paracetamol is such an important drug that the World Health Organisation have it listed on their 2015 model list of essential medicines (a list which has been published every year since 1977 detailing the most important medications needed in a basic healthcare system), and in the UK alone we spend millions of pounds each year on it. In 2014 the NHS spent over £80 million on paracetamol prescriptions. Considering that a 16-tablet packet can cost less than 20p, that’s an awful lot of paracetamol. What would we do without it? (Aside from being in a lot of pain.) It’s not nice to think about what it would be like not having it there to take when we want some relief. But it hasn’t always been there for us. So who was it that found it? And when? 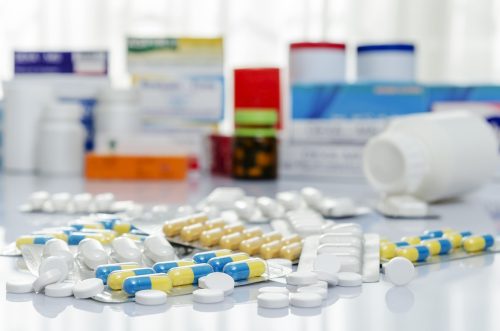 It didn’t begin with painkillers strangely enough. It began with fever-reducing drugs which had been used since ancient times. Compounds found in white willow bark and cinchona bark (the compounds were salicins, which are a family of chemicals which eventually led to the formulation  of aspirin) used to be used to reduce fever. However, in the 1880s the number of cinchona trees began to drop in number and the bark became harder to get hold of, so alternative forms of antipyretics were looked  for. Then, in 1893 the white, odourless, crystalline drug which we know today as paracetamol was discovered.

It was first found in Germany at the University of Strasburg where a professor named Adolf  Kussmaul got two of his students, Arnold Cahn and Paul Hepp, to treat some of his patients who had intestinal worms, with napthalene (more commonly used today as a solvent for chemical reactions or as a fumigant to repel moths!), as it had been used by others as an internal antiseptic. It didn’t kill the worms, but the naphthalene did reduce their fever. This was unexpected and so they sent the bottle they’d used to the lab and the results that came back showed that it wasn’t  naphthalene, but was a drug called acetanilide.

Unfortunately acetanilide had some fairly horrible side effects, such as cyanosis (the skin turning blue) as a result of methemoglobinemia, which reduces the levels of oxygen in the blood. It was determined that a less toxic compound had to be found. In 1887 the Bayer company brought in a derivative of acetanilide called phenacetin, which was far less dangerous, and it was this drug that helped to establish Bayer as a successful company.

Phenacetin might have continued to be the most widely used pain-relieving drug, and paracetamol never popularised, were it not for the fact that after 90 years of wide use, phenacetin had increasing concerns being raised about it in relation to it being a carcinogenic and causing kidney damage. Further research was carried out by different scientists, but after fifty or so years of conflicting results, in 1948 it was found by Bernard Brodie and Julius Axelrod (who went on to win a Nobel Prize in 1970 for neurotransmitter research) that acetanilide could be metabolised into paracetamol, and it was this that was the antipyretic and analgesic agent in both acetanilide and phenacetin. The reason why paracetamol was better was that phenacetin needed to be taken in a large dose to result in any kind of pain relief. This could be damaging. Paracetamol didn’t need nearly so much administering to be effective.

In 1950 Triagesic was released to the market in the U.S. It was the first paracetamol product to go on sale and was a combination of aspirin, caffeine and paracetamol. It wasn’t there for long though. A report was released that Triagesic was causing blood diseases, specifically a drop in people’s white blood cell counts, and as such it was taken off the shelves. Five years later when it was clear that paracetamol had not been the cause of the problem, paracetamol products were back. One year later 500 mg tablets of paracetamol began to be sold in the UK under the name Panadol. Few other analgesics were as gentle on the stomach or came with as few side effects as paracetamol, and given that other analgesics of that time contained aspirin which was known to irritate the stomach, Panadol, despite being only available by prescription to begin with, soon rose in popularity. In 1963, paracetamol was added to the British Pharmacopoeia.

Clearly we did get by before the discovery of paracetamol, but the idea of going back to a time without it is not at all pleasant. We fully agree with the World Health Organisation that it is an important medicine.

DISCLAIMER – When using any medication, always read the label and make sure you keep all medicines out of reach of children. The information supplied within this online resource is brought to  you by Imigran Recovery Tablets (contains sumatriptan) for migraine relief, from a variety of author sources including health care professionals, lifestyle experts and the general public. None of the published authors endorse any  brands.