A Brief Summary of Aspirin

Thousands of migraine sufferers take aspirin to try and relieve their pain. Every year the number of aspirin tablets taken by Americans comes to around 80 million, and that’s not counting non-prescription pain medication, plenty of which also contains aspirin in some form.

Aspirin helps to alleviate the symptoms of a wide range of complaints and it’s particularly good for migraine sufferers who experience certain types of migraines. These are the ones that are the result of contracting blood vessels in the brain, and also those migraines caused by inflamed nerves (one nerve that is commonly guilty of causing migraines is the occipital nerve). The reason aspirin is effective in these cases is because, firstly, aspirin reduces inflammation (so pressure on the nerve is reduced and pain relieved), and it also helps to “thin” the blood – this allows blood to flow more easily through the constricted blood vessels, again relieving pressure and pain. 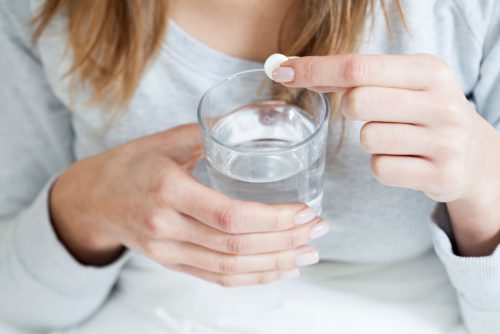 Aspirin is hugely popular now but it wasn’t an overnight success. The active ingredient in aspirin, salicylic acid, is found in willow tree bark, and was officially identified first in 1763 by the English clergyman, Reverend Edmund Stone. However back in 300 BC in Ancient Greece a form of it was being used by Hippocrates; he was using willow leaves for the relief of fever, pain, and the symptoms of a range of complaints.

Following Stone’s discovery, over the next ninety years scientists across Europe extracted the acid from willow bark and sought to make the desired compound synthetically. The salicylic acid could not be used in its pure form as it had side effects which included stomach problems and burnt throats. In 1853 the French scientist Charles F. Gerhardt synthesized the first form of today’s aspirin. Sadly it was unstable and impure but it was the first step.  Then in 1897 Felix Hoffmann, a German chemist working at Bayer made improvements to the method. Two years later Bayer started selling aspirin and it quickly topped the pain relief market.  Bayer is now one of the worlds leading pharmaceutical companies, thanks in large part to the success of aspirin. It was popular the world over and made huge amounts of money for the company who had the monopoly on it’s production.

This caused problems later. In1914 when the First World War broke out aspirin was still a trademark of Bayer, and this meant that the allies lost their source of aspirin. It was so vital as a drug that huge rewards were offered to anyone who could make it and in 1919, after Germany lost the war, Bayer was forced to give up their trademark as part of the Treaty of Versailles.  Despite this loss, Bayer managed to become so large that today it has branches of the company in almost every country in the world.

Aspirin is now made by a huge number of different companies and can come in many different manifestations, such as capsules, tablets, caplets and liquids. Each form has a slightly different manufacturing process, but when it comes to the hard tablets production is the most simple. The manufacturing process is called dry-granulation or slugging. Corn starch, water and a lubricant are added to the active acetylsalicylic acid (the synthesized compound form of the salicylic acid).  These three additional ingredients help to create a tablet of the right size and also help to hold the tablet together.

First all the ingredients (apart from the water) are weighed separately. Then the corn starch is added into purified water and heated to form a paste. Next the paste, the acetylsalicylic acid, and most of the lubricant are put into a batch mixer. The mixer blends the ingredients evenly together and gets rid of any air. Afterwards the mixture is divided into one-inch units called slugs. These are pushed through a mesh screen and the remaining lubricant is added. After which the mixture passes into tablet molds whereon a punch-machine does the final stage – compression. The end product is now ready for testing, and if all is ok with that, then comes packaging.

To ensure safety, every batch of aspirin has to pass a few important quality control tests. One of these is for hardness – they should not easily chip or break in everyday situations (e.g. being dropped). One test makes sure that the tablets are able to withstand packaging and shipping strains. This is known as their friability, and is tested through repeated tumbling and knocking of the tablets in a Friabilator. Finally comes the disintegration test, which makes sure that the tablets will dissolve over the right scale of time. The tablets are put into tubes that have a mesh bottom and then the tube are immersed in 37-degree water. After a set period of time the tablets are taken out to check that they have dissolved to the right amount. If all is ok the tablets can be packaged and a batch number and expiration date printed on the packaging. (old aspirin tablets can tend to smell like vinegar thanks to a hydrolysis reaction which produces ethanoic acid, so any smelling of vinegar might well be too old). All that is left to do once all the production, testing and packaging is done is to ship the tablets out to the pharmacies. After the product is released, there is continuous monitoring for pharmacovigilance and safety post-marketing purposes, so that the product remains safe for use.

It’s a common enough drug, and one that can be easily taken for granted. Averaging about 28p for a packet of 16 tablets, the fact that it’s so cheaply available over the counter is one reason why it’s so popular. It’s not the most complicated drug out there, and it can’t fix everything, but nevertheless it’s definitely an important medication for many.